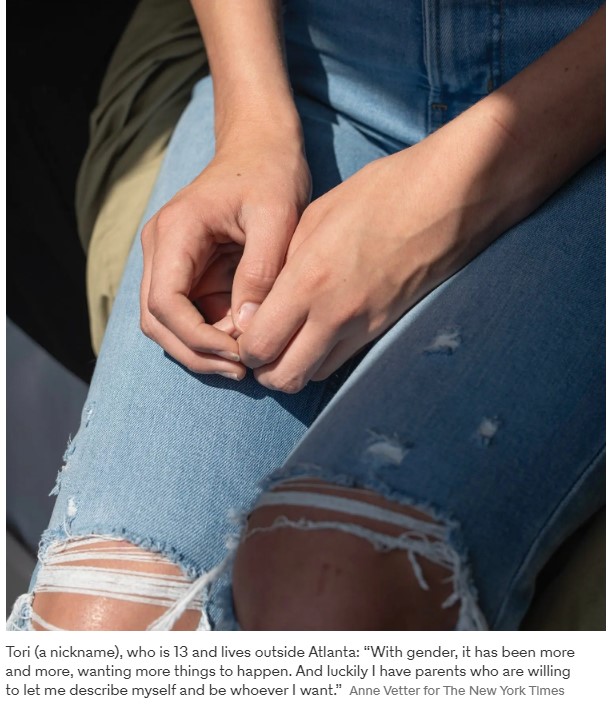 Scott Leibowitz is a pioneer in the field of transgender health care. He has directed or worked at three gender clinics on the East Coast and the Midwest, where he provides gender-affirming care, the approach the medical community has largely adopted for embracing children and teenagers who come out as transgender. He also helps shape policy on L.G.B.T. issues for the American Academy of Child and Adolescent Psychiatry. As a child and adolescent psychiatrist who is gay, he found it felt natural to work under the L.G.B.T. “umbrella,” as he put it, aware of the overlap as well as the differences between gay and trans identity.

It was for all these reasons that Leibowitz was selected, in 2017, to be a leader of a working group of seven clinicians and researchers drafting a chapter on adolescents for a new version of guidelines called the Standards of Care to be issued by the World Professional Association for Transgender Health (WPATH). The guidelines are meant to set a gold standard for the field of transgender health care, and this would be the first update since 2012. What Leibowitz and his co-authors didn’t foresee, when they began, was that their work would be engulfed by two intersecting forces: a significant rise in the number of teenagers openly identifying as transgender and seeking gender care, and a right-wing backlash in the United States against allowing them to medically transition, including state-by-state efforts to ban it.

During the last decade, the field of transgender care for youth has greatly shifted. A decade ago, there were a handful of pediatric gender clinics in the United States and a dozen or so more in other countries. The few doctors and therapists who worked in them knew one another, and the big debate was whether kids in preschool or elementary school should be allowed to live fully as the gender they identified as when they strongly and consistently asserted their wishes.

Now there are more than 60 comprehensive gender clinics in the United States, along with countless therapists and doctors in private practice who are also seeing young patients with gender-identity issues. The number of young people who identify as transgender nationally is about 300,000, according to a new report by the Williams Institute, a research center at U.C.L.A.’s law school, which is much higher than previous estimates. In countries that collect national data, like the Netherlands and Britain, the number of 13-to-17-year-olds seeking treatment for gender-identity issues has also increased, from dozens to hundreds or thousands a year.

Just as striking, the types of cases have changed. Many of the current group of teenagers haven’t told their families, from a young age, that they feel they are a different gender, though they often say they internalized such feelings for years. The average age when a young person first comes to a clinic tends to be around 14 or 15, according to some clinicians I talked to. Cases of teenagers coming out as trans aren’t new. But their prevalence is. In addition, the current caseload is around two-thirds youths who were “assigned female at birth,” in the current parlance of the field, and identify as trans boys — or as nonbinary, in a smaller but growing number of cases. In the past, by contrast, most patients at gender clinics were trans girls who were “assigned male at birth.”

As they worked on a draft of the adolescent chapter of the Standards of Care, the big debate among clinicians was how they should respond to the thousands of teenagers who are arriving at their doors. Some are asking about medication that suppresses puberty or about hormone-replacement treatments. Leibowitz and his co-authors thought that the timing of the rise in trans-identified teenagers, as well as research from Britain and Australia, suggested that the increased visibility of trans people in entertainment and the media had played a major — and positive — role in reducing stigma and helping many kids express themselves in ways they would have previously kept buried. At the same time, the authors acknowledged that they weren’t sure that visibility was the only factor at play.

As they wrote in their December draft chapter, part of the rise in trans identification among teenagers could be a result of what they called “social influence,” absorbed online or peer to peer. The draft mentioned the very small group of people who detransition (stop identifying as transgender), saying that some of them “have described how social influence was relevant in their experience of their gender during adolescence.” In adolescence, peers and culture often affect how kids see themselves and who they want to be. Their sense of self can consolidate, or they can try on a way of being that doesn’t prove right in the long run as the brain further develops the capacity for thinking long-term. To make matters more complicated, as a group, the young people coming to gender clinics have high rates of autism, depression, anxiety and eating or attention-deficit disorders. Many of them are also transgender, but these other issues can complicate determining a clear course of treatment.

Without stating them outright, the draft raises tricky questions: Could some of the teenagers coming out as trans today be different from the adults who transitioned in previous generations? For them the benefits are well established and the rate of regret is very low. How many young people, especially those struggling with serious mental-health issues, might be trying to shed aspects of themselves they dislike?